Your projects professionally designed and built

For companies involved in the processing and packaging of agricultural products such as potatoes, onions and carrots, DT Dijkstra designs and supplies complete turnkey systems, from product receipt to packaging machines or process cutting lines.

We can work closely with your architect and always have good cooperation and consultation with suppliers of other machines or systems. We are also happy to be considered for certain parts of new construction projects, such as this large bunker filling and storage system made of stainless steel for a potato processing French fries producer.

We like to deliver and assemble our machines in completely new factory halls. But we also have broad experience in working in dirty or tight spaces, even during the production process. We are currently working on a phased removal of an old steel bunker system. Each time after the removal of two old bunkers, two new and larger stainless steel bunkers are built, including the bunker filling conveyors. This is all done in a small space while the customer’s production process cannot be interrupted. 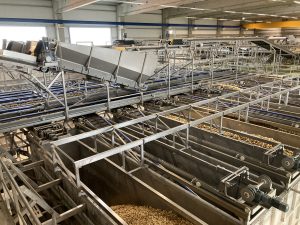 In this photo you can see a small part of a large project that is completely made of stainless steel. It concerns a bunkering plan with 36 bunkers in 3 different sizes for a total storage of more than 1,500 tons of washed potatoes. In this project, some innovations have been introduced to optimize the productivity of such a line. This photo shows an evenflow bunker with a maximum capacity of 4 tons. This even flow bunker can be used when a “bunker full” signal is received. Normally, the supply is then stopped and valuable production time is lost. However, if a bunker-full signal is received in this line, the supply line is not stopped, but the evenflow buffer is filled. With a supply of up to 100 tons per hour, there is a buffer time of almost 150 seconds. This time is more than enough to reposition the moving conveyors and filling conveyors to an empty bunker. As soon as all conveyors are in position, the line after the evenflow buffer is restarted. Temporarily at a slightly higher capacity than the supply line so that the evenflow buffer slowly empties again and becomes available for the next “bunker full” moment.

Two supply lines, each for up to 100 tons per hour. Thanks to sophisticated logistics with two evenflows, 8 moving conveyors and 18 bunker filling conveyors, 8 of the 36 bunkers can be filled simultaneously with sorted product. 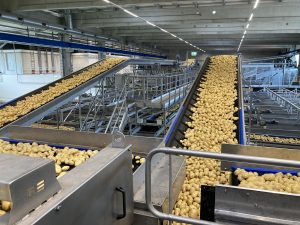 Washing and cleaning equipment from DT Dijkstra: hard on dirt, soft on your product
4 September 2020

This website uses cookies to improve your experience while you navigate through the website. Out of these, the cookies that are categorized as necessary are stored on your browser as they are essential for the working of basic functionalities of the website. We also use third-party cookies that help us analyze and understand how you use this website. These cookies will be stored in your browser only with your consent. You also have the option to opt-out of these cookies. But opting out of some of these cookies may affect your browsing experience.
Necessary Always Enabled

Any cookies that may not be particularly necessary for the website to function and is used specifically to collect user personal data via analytics, ads, other embedded contents are termed as non-necessary cookies. It is mandatory to procure user consent prior to running these cookies on your website.